What is Electronic Potting?


In electronics, potting is a process of filling a complete electronic assembly with a solid or gelatinous compound for resistance to shock and vibration and excluding moisture and corrosive agents.

While the wholesale migration from mechanical to mostly electronic solutions and components has virtually eliminated the wear and material fatigue inherent in exposed and moving parts, solid-state technology has its range of issues that can interfere with reliable operation.

One of them is moisture in electronics that can cause false alarms, faulty operation, and micro-corrosion, leading to component and system failure. Another is accelerated aging due to air pockets and gaps, as well as exposure to corrosive agents. Some of these issues can be addressed with suitable encapsulation of vulnerable components and systems in housings, but that increases cost and may add size and weight.

"Potting is a simple, cost-effective way to increase the reliability and longevity of electronics components and systems."

An alternate solution to mechanical encapsulation is "potting" of electronics. It's called potting because just like the vulnerable root system of a plant is stabilized and protected by placing the plant in a pot and the pot then filled with soil, electronic components can be "potted" in suitable enclosures and with suitable compounds that not only protect against shock and vibration, but also against formation of moisture and exposure to corrosive agents. The overall idea is to encapsulate vulnerable electronic parts so that they are kept from any kind of harm.

How Does Electronics Potting Work?

Let's take a closer look at electronics "potting." In essence, it's like creating a suitable "pot" to put electronics in, then filling that pot with special curable liquids (like epoxies, polyurethanes, or silicones) that have thermal insulation and adhesive structural properties. Note that a "pot" can also be a cast that is removed once the potting compound has hardened, or components may just be dipped in a compound to encapsulate them.

Among the many advantages of "potting" electronics is that it is a very flexible solution. Potting can be applied only to high-risk parts and components as well as to complete boards and assemblies. Many potting materials are available, addressing conductivity, electrical and thermal isolation, and protection against various environmental conditions and threats.

How is potting done? That depends on the type and use of the components to be potted.

On the chemical side, some materials or adhesives may have chemical reactions with certain potting materials, potentially resulting in non-cured areas. The proper potting compound is identified to produce the best result. Some electrical components may be inadequately sealed so that potting material may go where it is not supposed to go. Such components must be identified to avoid malfunction later on. 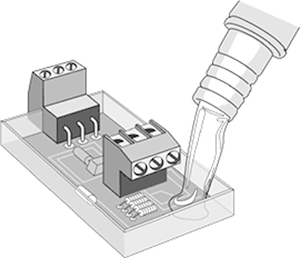 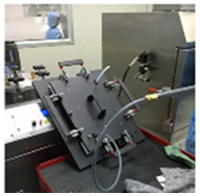 The electronic potting process requires highly specialized equipment. It includes machines for precise, uniform mixing of potting materials and de-gassing tanks that eliminate any air bubbles in the materials. Equipment must allow for precise adjustment of potting material ratios and flow speed. Electronic potting facilities also include vacuum and curing chambers with full temperature controls. Additional considerations here are the length and temperature of the curing process that have an impact on shrinking.

Upon an initial potting run, technicians inspect to determine potting flow patterns, proper filling, curing. Sample units are dismantled, sliced, and then carefully examined. Findings are documented, and inspectors compile notes and checklists for potting operators. If problems are found, the potting process and materials are adjusted, and inspections are repeated until everything is expected. Potting samples may be kept for mixing ratio approvals.

The benefits of potting are considerable. Potting does not only protect against moisture and exposure but also shock and vibration. It completely removes the harmful impact of air and moisture from the maintenance, reliability, and longevity equation while still protecting noisy parts and components sensitive to EMI.

How Does Potting Compare to Other Protective Solutions?

While potting is a mature and cost-effective way to protect electronics, other solutions can get the job done. One is a conformal coating, where a thin protective layer is applied to an entire circuit board. Another is placing components and systems in fully sealed housings. Both methods are widely used and have many beneficial applications. But, depending on the application, they may be less cost-efficient than potting, and neither conformal coating nor complete enclosures can address the issue of trapped hot air. As a result, strategically applied potting to at-risk components is often the best and most cost-efficient solution.

As the usage of electronics increase in modern life and industry areas, potting is an essential tool in keeping things up and running.


Apart from these three examples, there are numerous other electronic applications and solutions where exposure to liquids and varying temperatures occur. All are at risk because even minute breaches in enclosures will result in moisture exposure and corrosive effects. Here again, electronic potting can help. 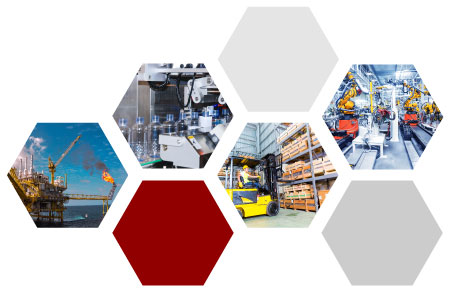 The Success of a Potting Project Relies on 4 Things: